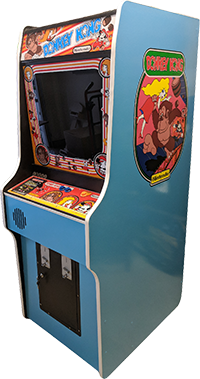 I've always been drawn to Nintendo's cabinet style, so when I saw a Nintendo cabinet on Craigslist only an hour's drive away, I jumped at the chance to get it.

The cabinet I picked up was orange. It had been converted to Arkanoid and had a beautiful original Sanyo CRT with no burn in. The monitor bezel was for Donkey Kong Jr., though it had been flipped backwards so the artwork was hidden.

There were two ID plates on the back of the cabinet: DJR1-UP and DKC1-UP-US. The former was obviously for Donkey Kong Jr. (which matched the bezel), and at the time I assumed the latter was for Donkey Kong, so I began the project as a plain Donkey Kong restoration.

It wasn't until well into the project that I found this list, which indicates that DKC was for Donkey Kong 3. That means the cabinet was probably a Jr. that was converted to a DK3, or visa versa.

I'm a little disappointed that I didn't find this out before I started the project, but at least it's still in the DK family.

The cabinet was in pretty good condition, but there were some rough areas I wanted to take care of first.

Nintendo cabinets have two wheels in back so you can tilt the cabinet up and taxi it around easily. The cabinet rests on a board in front, which can get quite beaten up over time. I decided to build a new base after watching this video by The Canadian Arcade. My base is much simpler, but it gets the job done.

It's always so satisfying to see a cabinet's marquee light up, so I took care of that next. I used the NovaMatrix Linx 2 marquee LED strips from GroovyGameGear. I used a previous version of this same product on my Galaxian restoration, and I was very happy with it. They are low voltage, so you can run them directly off of a 12v DC line.

As is normal with cabinets that have seen a lot of moves, this one had several dings that needed attention, especially around the edges. I used Elmer's Wood Filler to fill the missing chunks, then sanded down the areas once they dried to make sure they were smooth.

I needed to make sure everything was especially smooth because I decided to use vinyl siding instead of paint. I chose vinyl because it worked out pretty well on my Galaxian cabinet; I went with the blue vinyl kit from This Old Game.

The coin door had taken a lot of abuse. Normally this can be solved by a can of Rust-Oleum Hammered Metal Finish Spray Paint, but in this case, the damage was more than just cosmetic. The door itself was so bent out of shape it would barely close.

I decided to use a reproduction coin door from a member of the KLOV forums. I also got new coin mech face kits from Mike's Arcade.

GameOnGraphix has done great work for me in the past, so I went with them again for the side art as well as the marquee.

The monitor bezel is from Mike's Arcade, which has a great selection of Nintendo parts.

I found out the hard way that some Nintendo cabinets, like this one, need special T-molding with the middle groove offset instead of centered. Fortunately, I was eventually able to find Nintendo "True Offset" T-molding from Chomping Quarters.

For the control interface, I went with a Mini-Pac from Ultimarc and one of their pre-made wiring harnesses. I hung onto the original wiring harness that came with the control panel, though, so I can use it if I ever decide to install an original Donkey Kong PCB.

The cabinet came with an original Sanyo CRT monitor that was in excellent condition. No visible burn in at all! I decided to get the ArcadeVGA from Ultimarc, which I'd heard good things about, so I could interface the monitor directly with the PC. This is a PCI Express video card that has a custom firmware that allows the card to output the special 15kHZ signal that arcade monitors require. I used Ultimarc's VGA monitor cable adapter to connect the CRT to the video card.

I decided to go with an Intel Atom 330 Mini-ITX motherboard mounted using a LogicSupply CT100 open-frame mount. This mount is nice because it also has spots for the PC's power supply and SSD.

The single speaker audio is driven by a Lepy LP-2020A mini amplifier. I chose this because it has an integrated volume knob that I can access via the coin door.

To turn the cabinet on/off, I added a standard arcade button to the rear top of the machine, which connects via a custom-built cable to the power-on pin of the PC motherboard. When the PC turns on, it pulls power from a smart power strip that turns on the rest of the outlets, powering on the monitor. Another single press elegantly shuts down the PC, then turns off the monitor.

The machine has 11 games on it, and it boots directly into Donkey Kong when powered on.

Using a button key combination, the user can exit to a menu to select a different game. I couldn't find an existing menu system that looked like software from the cabinet's era, so I wrote my own in C#, and have made the source available on GitHub.

As a bonus, I added a modern game: Downwell. This is an excellent arcade-style platformer that was released in 2015, with simple yet addictive gameplay indicative of the golden age of arcade games. It has simple pixel art and color palettes and requires only three buttons (left, right, jump/shoot), so it was a perfect fit for the cabinet. It looks amazing on the CRT.

I'm very happy with the way this cabinet turned out. The original CRT is beautiful, and running the games at their original resolution and being able to play a modern game on the hardware is novel.

In the future, I may add original Donkey Kong and/or Donkey Kong Jr. PCBs. Or maybe I'll even go back and build a custom control panel.

A full gallery of pictures showing the restoration process is available via Imgur.