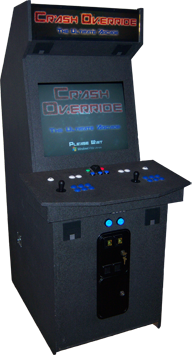 Crash Override is an arcade machine that I built for my high school senior project.

It is what is commonly referred to as a "MAME cabinet": an arcade cabinet running the Multiple Arcade Machine Emulator (MAME) software.

Crash Override plays 2,000+ arcade games as well as the complete collection of NES, SNES, Genesis, N64, PlayStation, and Dreamcast console games. Since it is a Windows-powered PC, it can also play any PC game.

A pair of lightguns allows play of classic shooters like Area 51 and Point Blank.

The 27" Makvision CRT monitor is an authentic arcade monitor, which is becoming hard to find these days. The audio system is a 4.1 setup with a volume control mounted on the control panel.

Joysticks can be switched on the fly between 4-way and 8-way operation with a single button press on the control panel.

Finally, the entire cabinet is coated with truck bed liner for a unique look and durability.

More information and specific parts are listed after the photos below!

Below are photos from the original project construction.

The most obvious change is the replacement of the 19" CRT monitor with an authentic 27" Makvision CRT monitor. It was very exciting to get the 27" installed; the 19" had annoyed me since I first built the cabinet. Looks much better now!

I replaced the I-PAC with a U-HID and redid most of the control panel wiring along with some much-needed interior cable management.

I also replaced the joysticks with ServoStiks, which can be switched between 4-way and 8-way operation with the touch of a button on the control panel. This is possible via a quick C# application that I put together; it listens for the button press and flashes the light on the control panel to let the user know the restrictor plate is rotating.

The original build used a custom front end that I wrote in Visual Basic 6. Since then, several really great front ends have been developed, and I ended up replacing mine with HyperSpin.

And as a final touch, I redesigned the marquee and had it professionally printed by the guys over at GameOnGraphix.com.

As with any project this large, it will never be fully finished; there will always be a few more tweaks to make. But I'm going to call it "finished" for now because I have a few more cabinets in the garage to work on.