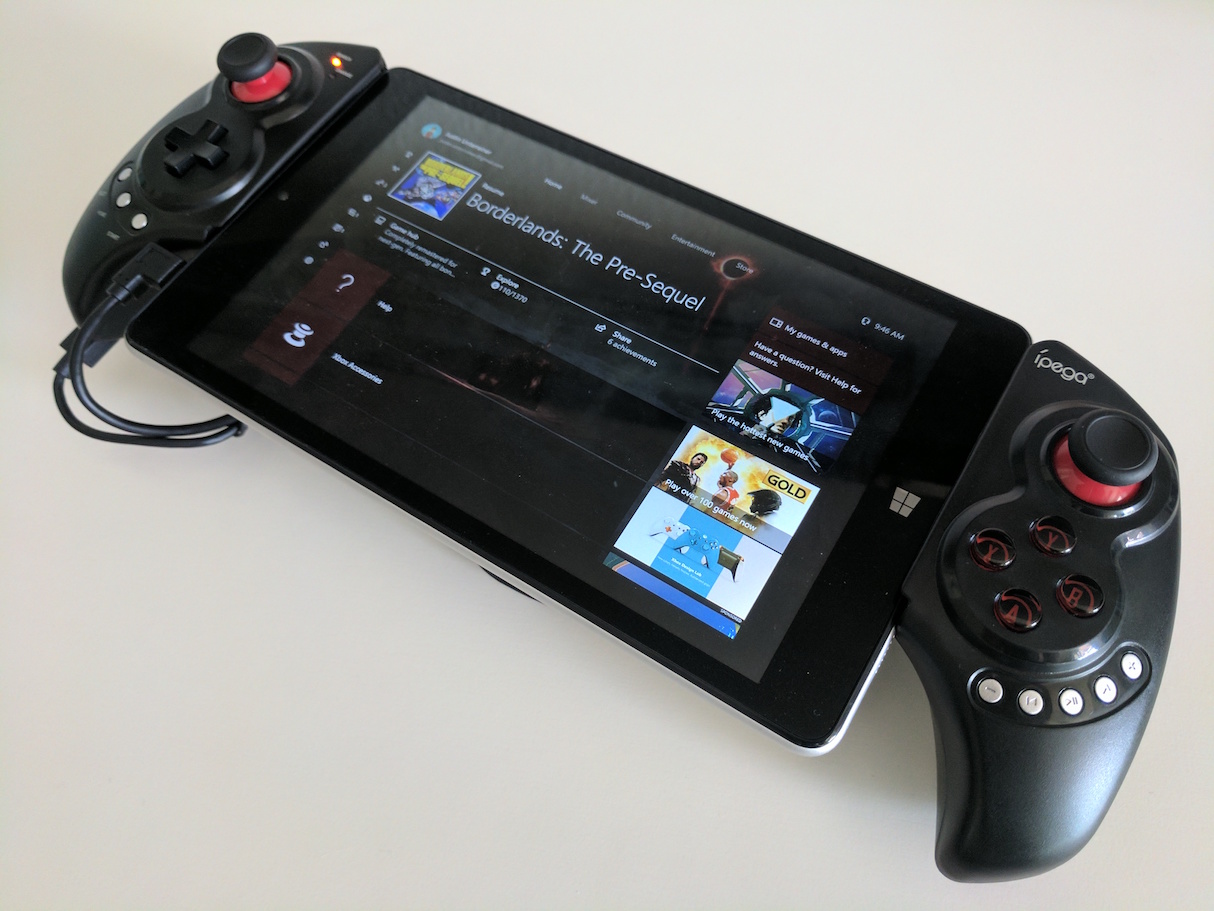 My wife and I enjoy playing co-op games together. Unfortunately, it seems that split screen couch co-op games are exceedingly rare, and most require you play co-op with two consoles linked over the network.

We have two Xbox One consoles for this reason. With one digital copy of a game and one of us on an Xbox Live Gold subscription, we can play the game simultaneously on both consoles, linked up in co-op mode.

The downside is that we need to put a second screen in the living room to play. For a long time, we did just that; we had a spare 32" HDTV we'd pull out from the closet, set up on the coffee table, and hook up to everything. This solution was less than ideal, though. It would often need to be out for weeks at a time while we worked through a game. The wires would inevitably get tangled, and it was an eyesore sitting there on the table.

Once we got tired of looking at the second screen on the coffee table, I started to search for alternatives. The Xbox One has a game streaming feature, after all. Wouldn't it be nice if the second person could just stream to a Wii U-like device?

TL;DR: Skip below to the pictures and product list.

Let's talk about the Wii U for a second. While it may not have had the third-party backing it needed to compete with rival consoles, it did have a killer feature that I've wished for on its competitors: the ability to stream games to a portable gamepad. 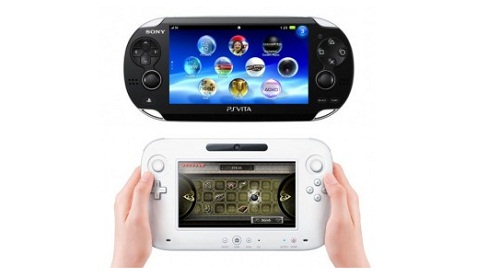 Now, it's true that Sony's PS3/PS4 consoles have had this functionality for some time with the PSP/PS Vita, but it was Nintendo's Wii U gamepad that really got me excited about the feature. The reasons boil down to one: its superior form factor. The Wii U tablet is like a full-sized controller bolted onto a lightweight screen. These full-sized controls are key for me, as I haven't found a handheld yet that didn't cause my hands to cramp up within 20-30 minutes (looking at you, 3DS!).

Now, with the release of the Switch, streaming isn't even needed, since the hardware is in the tablet itself!

So we wanted a Wii U-like device. For a while, it seemed like we might get exactly that. The libdrc project is a library that allows streaming to the Wii U gamepad from a PC. Unfortunately, it required a Wi-Fi adapter with specialized firmware, and the project has since stalled. Darn.

But since the Xbox One natively supported streaming, perhaps we could just do it ourselves.

The obvious solution was to use a laptop and stream to that. And we did that for a while. I had Windows 10 installed in Parallels on my MacBook, and it worked pretty well.

It was still inconvenient, though. I needed to boot Windows 10 and possibly wait for updates. I needed an extension cord running to the couch for power. I needed a hardwired USB controller and headphones. On top of all that, I had to constantly shift the laptop around, as it generated an uncomfortable amount of heat.

The next step was to see if we could bring together some off-the-shelf parts to build our own gamepad.

To see if this would to be feasible, I started with an 8" NuVision tablet and a Nyko Smart Clip (left over from playing Fallout 4 with the companion app on my phone). 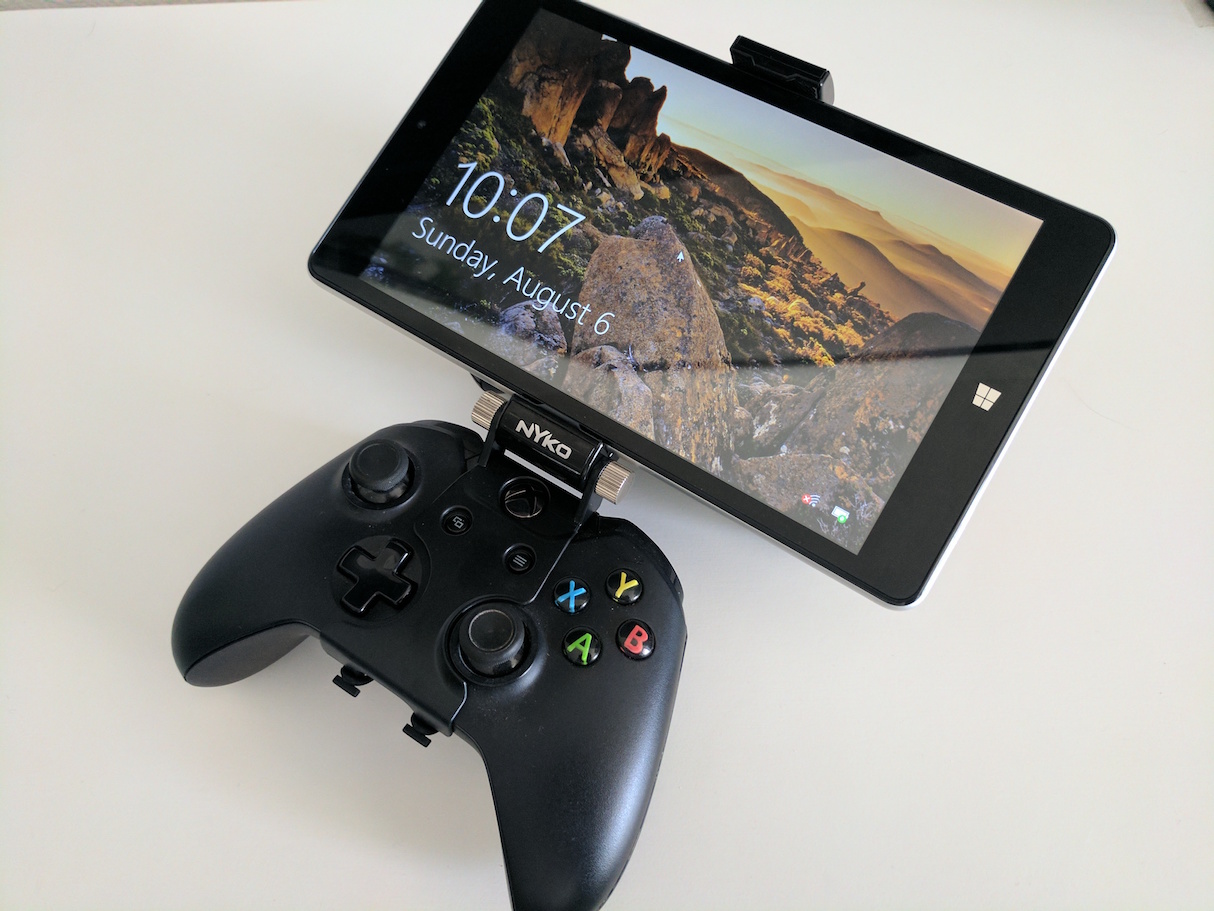 This brought two issues to light. The first was that it was very top heavy. I had to rest it on my legs to play for more than 10 minutes. But more importantly, the tablet's built-in Wi-Fi was not up to streaming from the Xbox One, even on the lowest setting. This meant we'd need a separate USB Wi-Fi adapter.

Even with its flaws, it was still impressive to stream Borderlands: The Pre-Sequel and Battlefield 1 straight to a handheld device. This first "beta" build proved we were onto something, and that we should continue the build.

The Wi-Fi issue was easy enough to solve; we simply needed a good USB Wi-Fi adapter and a USB OTG cable to connect it to the tablet. It would also be ideal for the controller itself to connect to the tablet, instead of wirelessly connecting to the console, so we could move the console into the server closet. So I grabbed a USB hub as well.

Considering the form factor issue, I started looking into telescopic game controllers. Most of these strap onto your phone and connect with Bluetooth. I needed one that connected via USB and showed up as a Xbox 360 controller, so the Xbox app on Windows 10 could use it for streaming. I ended up getting the IPEGA PG-9023, which does just that.

Using some double-sided tape, I mounted the USB hub on the back. The USB OTG cable connects the hub to the tablet. The controller and Wi-Fi connect to the USB hub.

I also had to get some special right-angle USB mini OTG cables, because the cable sticking directly out blocks the right bumper button or left grip.

After the right-angle cables were attached, it all come together quite nicely! 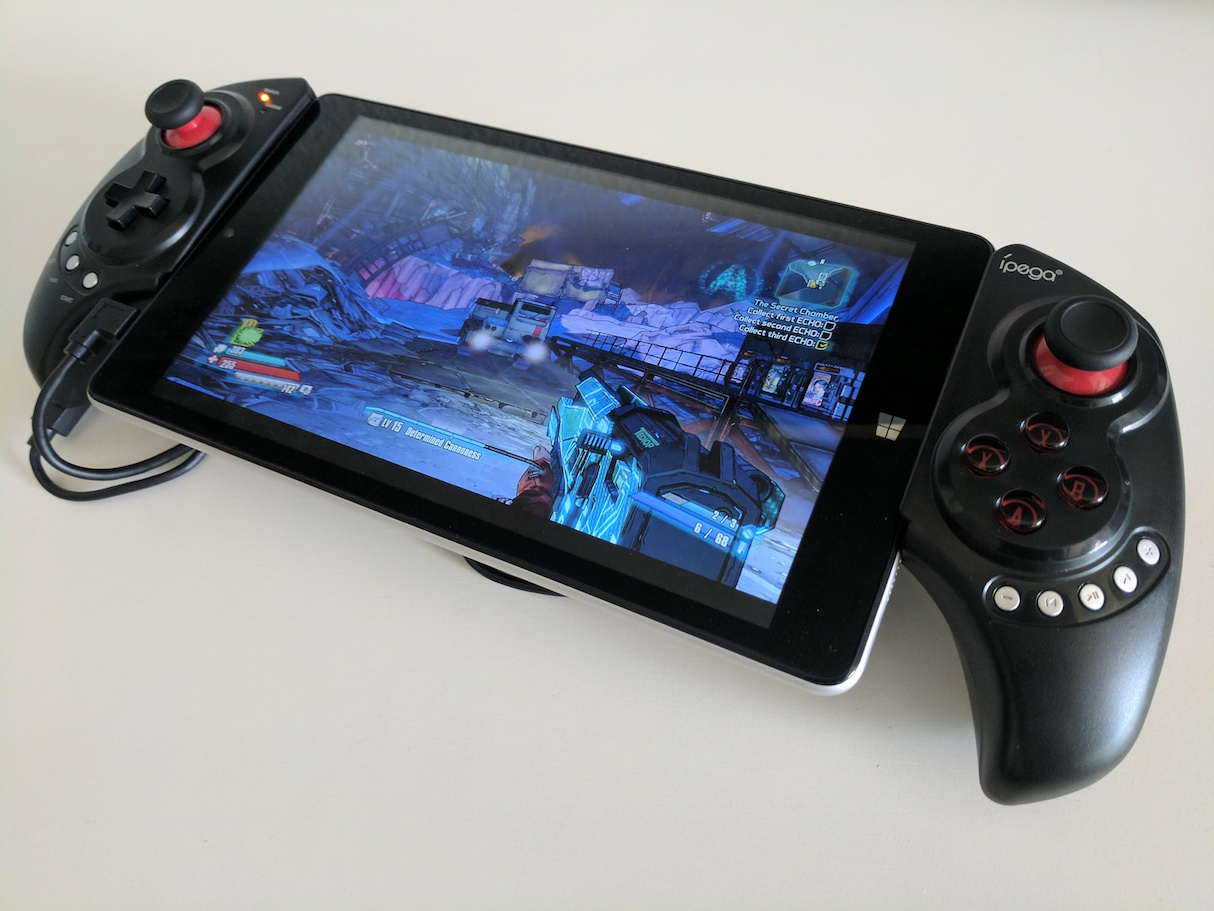 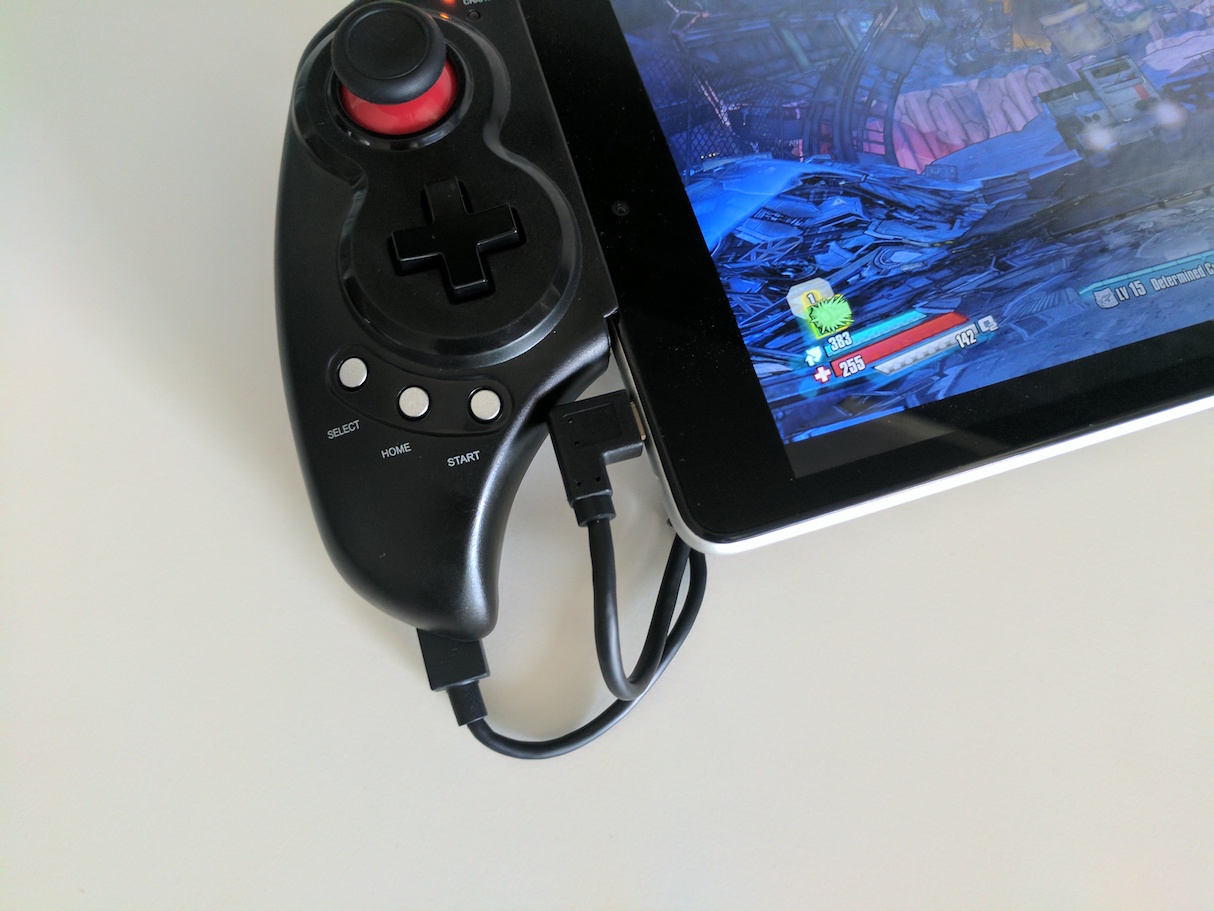 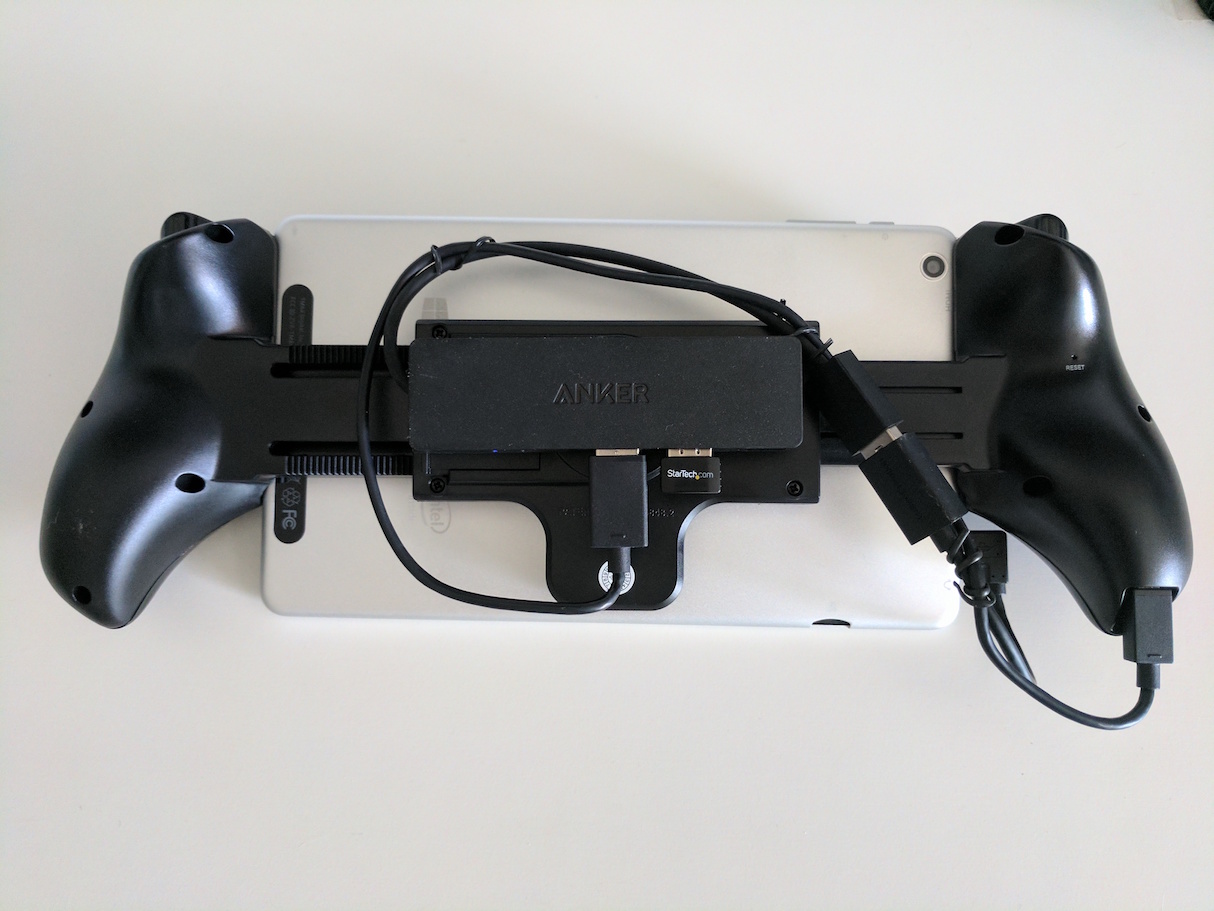 This build works great! It gets around 2 to 2.5 hours of battery life, which isn't stellar, but it gets the job done. Streaming is buttery smooth, even on the "Very High" setting, with the USB Wi-Fi adapter.

A few downsides should be noted. First, since the single USB port on the tablet is used for charging, you cannot charge and use the USB hub at the same time. Once you're out of power, you have to take a break. Second, the speakers are obscured by the controller itself, so you'll need headphones, and probably Bluetooth ones, as plugging into the headphone jack will impede the top trigger buttons and USB port. Finally, the triggers are not analog, so it may not be great for racing or other titles where half or quarter pulls of the trigger are needed.

At the end of the day, I'm very happy with the build. Here is the full list of parts if you want to replicate this setup.

I still hope that the homebrew community builds a streaming app for the Nintendo Switch. Definitely a slim chance, but I can dream!

About Justin Unterreiner
Northern California
A software geek who is into IoT devices, gaming, and Arcade restoration.
Previous Post : Simplifying async/await error handling   Next Post : The Visual Studio 2017 installer is an Electron app